SO FEW AND FAR BETWEEN

Just like the Haiku, the short spurts of silence say a whole lot, and one's always tempted to read between the lines... 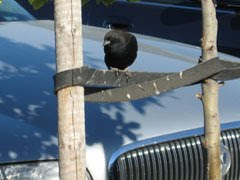 AT THE PARKING LOT ACROSS OAK HILL CEMETERY 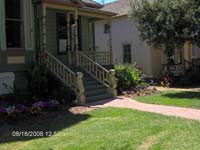 
...worlds contained in brick
and mortar come alive—
we inherit their past. 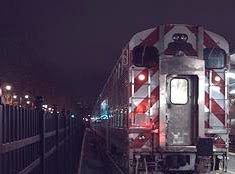 ...the plaintive sound of the Caltrain
slices through the silence—scarring
the night.
Posted by Pushpa at 3:43 AM No comments: 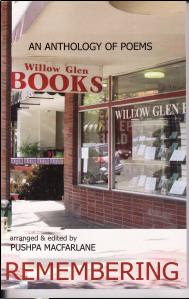 http://www.poetryatwillowglen.wordpress.com
REMEMBERING, an Anthology of Poems Read at Willow Glen Books, my first publication, was released by Jacaranda Press, a non-profit publisher in San José owned by Jean Emerson, a poet and mentor, and someone who was instrumental in keeping the poetry readings active at the bookstore.

Willow Glen Books was one of the last independent bookstores in San José. Its closing prompted me to put together an anthology of poems read at this long-standing bookstore as a tribute to the monthly poetry readings held there.

For nearly two decades, poets from the South Bay read at Willow Glen Books, on Lincoln Avenue in Willow Glen, a close-knit community of San José. The readings were held every month and poets from South Bay or out of the area, read and shared their poems at open mic.

The audience, comprised of the community from in and around Willow Glen, came to the bookstore with Pavlovian earnestness to hear poetry, until as recently as 2009 when Willow Glen Books closed its doors. Cathy Adkins, the store owner, who dedicated her life to sustaining the lore of books, and maintaining a haven for all book lovers, provided a waterhole for poets in the South Bay. But, as the blast of a failing economy reverberated throughout the country, she decided to retire and close the bookstore.

Remembering, serves as a diorama and encapsulates poetry read at Willow Glen Books, and remembered not only by the contributing poets, but by members of the community—the audience.

The anthology is a celebration of poets and their poems and nearly two decades of their dedication to read, recite, and promise not to disappoint the community, whose participation and encourage-ment is what poets came for. Without one, the other was impossible.

This collection recreates a community of voices, each bringing its own melody, rhythm, and harmony. You will find a sampling of poems whose themes are as varied as the imagery is diverse. It captures the enthusiasm of the poets’ collective voice that evokes the spirit and camaraderie in which these poems were read—poems that transcend geography, and travel across time to regenerate into something timeless—something worth remembering.

On Saturday, March 5, 2011, a reception was held at History Park, San José, to celebrate the release of the anthology. Jean Emerson and Cathy Adkins both addressed the gathering, followed by open mic, where contributors read their poems from the anthology, and magically recreated the ambiance of poems read at Willow Glen Books. Again, something definitely worth remembering.
Posted by Pushpa at 6:41 AM No comments:

phase to phase with pica

n. A printer's unit of type size, equal to 12 points or about 1/6 of an inch...
n. An equivalent unit of composition measurement used in determining the dimensions of lines, illustrations, or printed pages...
n. from Latin, magpie

Like a tidings of magpies,
a river of birds, or
the rush of waves,
snowflakes of pear blossoms
after wintertide
waft like meteor showers,
across the darkened night
lighting the way for roving souls,
or tear-stained children
crying for home
in a heartless world that
only words can soften. 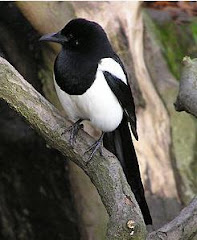 as the line turns...